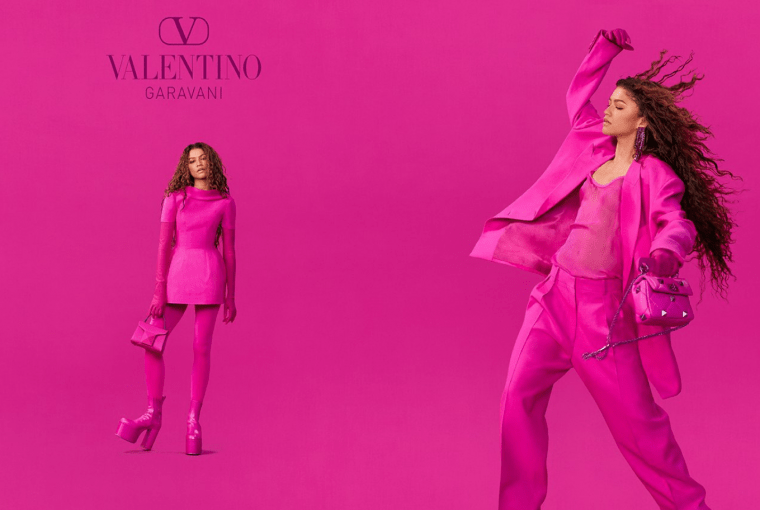 Pink has always been Valentino’s symbolic color, and the maison brings forward a gush of emotions from that single hue – pink. The creative director Pierpaolo Piccioli of Valentino recently launched the new Valentino PINK PP Collection with magenta pink at the centre.

Valentino was previously associated with the color red, but for Fall/Winter 2022, the house has taken a liking to the intense, magenta pink color. The color is powerful enough to be the signature of the brand’s identity. It was spotted at Valentino’s Haute Couture Show in Rome last month, where Anne Hathaway, Ariana DeBose, Florence Pugh, Hwasa and more wore dresses in Piccioli’s magenta color.

“One color, bold, strong, fluid, extravagant, one color to summarize everything I like in fashion and everything that I choose to represent: the liberation from the ordinary, a space to be oneself, a loud symbol for equality and love,”

The Italian luxury house is about to unveil its Pink PP advertising campaign for fall 2022 in the upcoming week. The campaign is to be fronted by two international talents — Zendaya and Sir Lewis Hamilton – each portraying the brand’s ideals with their charms.

“The idea of Pink as a barrier breaker was born long ago. With my work I must be able to tell and share my values through one single picture and I wanted to apply the same paradigm to one color. As a consequence it was almost natural to me to look (and find) something that could embrace the need for expression and representation of a new and liberated humanity. I chose Zendaya and Lewis for the PINK PP for the same reason I created this color, beautiful souls that use their voice and talent to unify, integrate, build.”

The designer stripped the palette to a single hue, identifying it as the color of love, community, energy and freedom. For the new campaign, Zendaya was photographed in a monochromatic space, wearing a pink peplum minidress accessorized with sky-high platform boots, a stud bag and gloves.

The talented actress, singer, dancer and activist has worked for several Valentino campaigns since December 2020. Valentino will also release a video with Zendaya by “Euphoria” cinematographer Marcell Rév, connected with the Valentino Rendez-Vous campaign.

The one who took over the stage as the first Valentino menswear DI.VAs for the new Valentino Pink PP Men is Sir Lewis Hamilton. For this campaign, Hamilton wears a pink cape-jacket, loose pink pants and pink sneakers. He is seen looking down at a can of pink paint with a paintbrush in his left hand. There is a manifesto behind him spelling out: “Still I Rise.” which is symbolic of his unwavering passion.

The seven-time Formula One World Champion has often been photographed in the brand’s designs. And now, finally, he is the first Valentino menswear DI.VAs for the Valentino Pink PP advertising campaign. DI.VAs stands for different values that fit well with Piccioli’s ideologies about inclusivity, civil rights and support of diversity. Hamilton embraces the values of Pierpaolo Piccioli with his passionate and authentic persona, while his fierce advocacy has been the driving force in Formula One.