“In its original incarnation in the 1960s, the miniskirt was ‘quite radical’.”

Mini skirts were previously associated with the youthquake movement and the FDA approval of the birth-control pill. Although it started around knee-length, over the years, it inched upward through the ’60s and ended up as micro-minis. Within the following decades, it repeatedly cycled in and out of the fashion. And here it is again, grabbing all the attention it can get worldwide.

The Miu Miu’s mini skirt was first seen on the spring 2022 runway in October. The Miu Miu collection presented a sexy and unusual outlook on clothes associated with office jobs and school uniforms. The mini skirt stole the limelight with its edgy, low-rise, and strikingly short look. Miu Miu put together several mini skirts but the one standing out was the khaki and gray pleated skirt.

Miu Miu again showcased its trendsetter mini skirts with the popular model, Hailey Bieber, for their Spring/Summer 2022 collection. This set of ultra-cropped top and ultra low-waist mini skirts by Miuccia Prada left people stunned. The skirt was later on spotted on Zendaya for the cover of Interview Magazine. The two models were, however, not the only ones rocking this 00’s nostalgic trend.

American rapper Saweetie was also seen in the mini-skirt that she wore with socks and strappy heels, and neon orange claws. Another Italian fashion influencer Chiara Ferragni also wore the skirt with a cropped grey knit sweater and bright blue cropped shirt underneath, and grey stocking with embellished black shoes to attend the New York Fashion Week.

And even Nicole Kidman hopped into the trend when she wore Miu Miu’s mini skirt for the cover of Vanity Fair’s Hollywood 2022 issue. Lately, it was supermodel Paloma Elsesser who got the look on the cover of i-D‘s latest issue. In one of the interviews, she stated, “I am sexy, and I am not just going to wear a stretchy dress. I’m wearing the Miu Miu,” as shared on the magazine’s official Instagram profile

Several other editorials, magazines, influencers, and celebrities can be seen keeping up with this vintage fashion trend and joining the sisterhood. Mini-skirts have always been controversial and are not deemed to have a long life span. Even though the critics are cruel about this apparel, it is equally embraced by women all around the world. Although the trend may be short-lived, it always revives within a time span as it is now!

The Much-awaited Return of UK Contemporary and Luxury Brands at Paris Fashion Week! 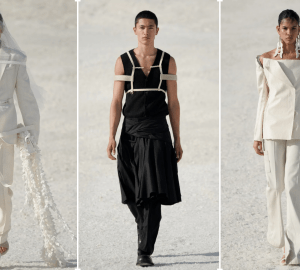