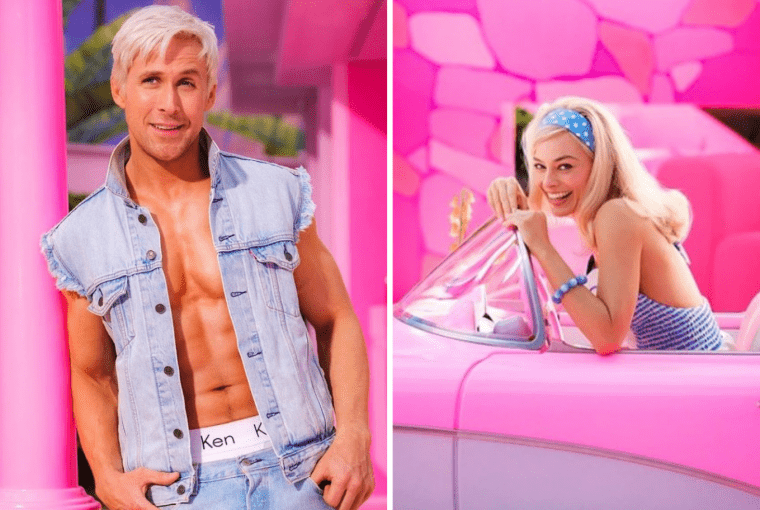 Margot Robbie as ‘Barbie’ and Ryan Gosling as ‘Ken’ in the upcoming “Barbie Movie” are bringing Barbie fashion trend!

We have gotten our new Barbie and Ken for 2022! On Monday, Margot Robbie and Ryan Gosling were spotted dressed in their respective characters for their upcoming “Barbie” movie. The pair was seen wearing matching neon pink and lime retro ensembles inspired by the ‘90s workout gear. The video of the two went booming on the internet making us more eager for the release of the movie!

Both stars were wearing rollerblades on the set while filming in Venice Beach, Calif. The outfits gave us nostalgia, reminding us of “Hot Skatin’ Barbie,” the real life doll that was released in 1994. Margot playing the role of Barbie was in a similar outfit and accessorized with roller skates, ice skates, a helmet and hair brush.

Previously the two stars were spotted slaying Western-outfits. Margot was dressed in a hot pink vest and matching flared pants, both of which were donned with glittering star designs. Completing the look, she also wore a pink paisley scarf around her neck as her long blond hair was let down in loose waves. Gosling sported a black and pink cowboy Ken look which is driving us crazy!

In April, the Warner Bros production company revealed the first photo of Robbie in his character Ken. Ryan was wearing an all-blue outfit in a bright pink retro convertible against a matching pink backdrop giving us real life Ken vibes.

On the other hand, Margot’s Barbie version was revealed with her seated in a Barbie car wearing stripped top and a headband. She surely looks life a Barbie coming to life in the set up!

The movie is scheduled to be releases on July 21, 2023 and will only be available to watch in theaters. Meanwhile, to get us all pumped up for the movie, we have a few celebs who are following the Barbiecore Fashion trend!

Some Of The Best Hailey Bieber Outfits For Street Fashion Inspo!

An Ultimate Fitness Guide On Gym Accessories For Men In 2022