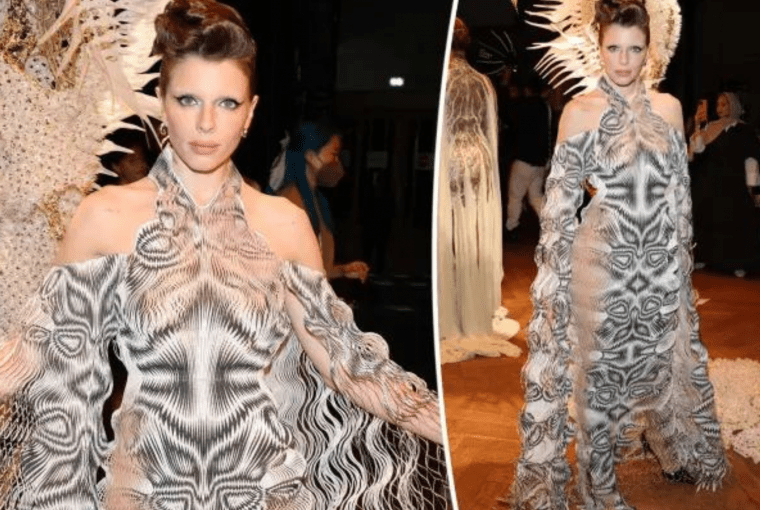 Kanye West’s ex-girlfriend, 32, exposed her washboard abs as parading down the street in a leather crop top and skirt pair, making it her own personal catwalk. She dressed up in a pair of gleaming black heeled boots for a mini photo shoot with a female friend.

Julia wore her brunette hair up in a stunning updo and accessorized with a black shoulder bag and sunglasses. Earlier in the day, the Uncut Gems star stunned in a figure-hugging fishnet gown at the Iris Van Herpen Haute Couture Fall Winter 2022-2023 show.

On July 4, the “Uncut Gems” actress attended the Iris Van Herpen Haute Couture fashion show, dressed in one of the designer’s iconic psychedelic gowns with loads of pleats and an optical illusion pattern.

And, while we’re sure she’ll be seen on other runways this week, the model skipped the Schiaparelli Haute Couture show, which she attended in January with then-boyfriend Kanye West.

The duo made their red carpet debut at the Kenzo Fall/Winter 2022/2023 fashion show, coordinated in black gloves while she matched her cone-bra cropped jacket with low-rise trousers and debuted her now-signature smokey eye.

Despite their breakup, Fox’s fashion career has taken off since she parted ways with West, who is known for dressing his women. Fox made her catwalk debut for LaQuan Smith in February, attended Milan Fashion Week on her own, and donned progressively daring outfits on and off the red carpet.