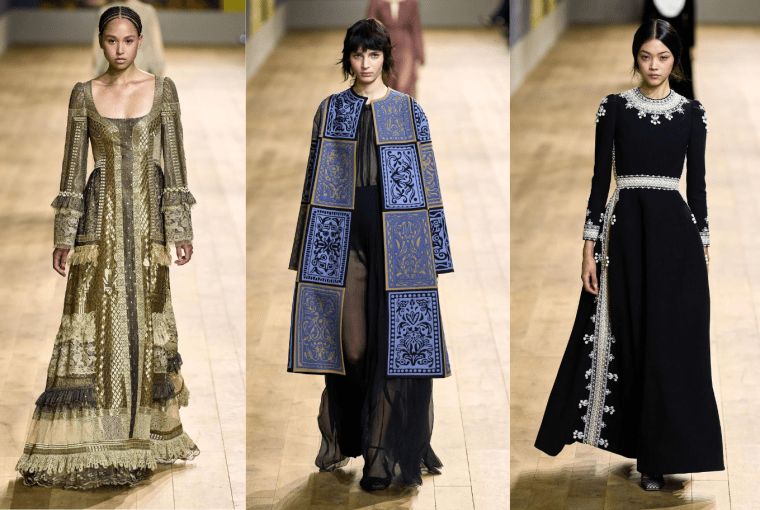 Dior’s creative designer, Maria Grazia Chiuri, saw the work of the Ukrainian artist Olesia Trofymenko in spring, and in that instance she already knew they would be working together for her fall haute couture show!

This is a matter of shaping materials and forms in the space for reflection that the atelier represents, permeable to the social reality in which we live; a matter of recalling what it means to be human today. Gestures passed on, learned and always perfectible, are repeated. The tree of life is a call, a warning, to make traditions and gestures shine through, allowing us to recover a balance, if only momentarily.”

About The Dior Fall Couture Collection

Some of the note worthy outfits from the collection were tartan co-ord set with hand-stitched detail, a gauzy floor-grazing maxi cinched at the waist, and a mid-length dresses with a Mao collar, something similar to what you wear on Chinese New Year. Loose braids falling down at the back and barely-there makeup with a flush kept the sights hooked on the outfits.

The dresses depicted why and how we dress as a prominent theme while the garments paid a metaphorical tribute to different countries and cultures. The underlying message was all about how we all belong together.

“It speaks about the circle of life. And we have to remember all the time. In some way we need to rethink again now, to move to the future.” Chiuri observed backstage prior to the start of show.

The color palette this season oozed of white and pale beige with some similarity in the long silhouettes. The big-sleeved blouses, tiny jackets and capes were overpowered by the intricate way in which flowers, especially the Dior rose, were embroidered into lace patchworks giving a 3-D beaded embroidery.

This collection could seem like an unusual ‘Dior’ collection from Chuiri but if you look closely you realized that Dior corsetry had simply transformed to dirndl-like dresses, and that the Bar jacket were reconstructed from finely pleated hand-smocking.

This entire Dior Fall Couture Collection 2022 could be said to be less rigid and more on the romantic side. Based on more of culture and tradition, the outfits were simple yet extraordinary in their own way!