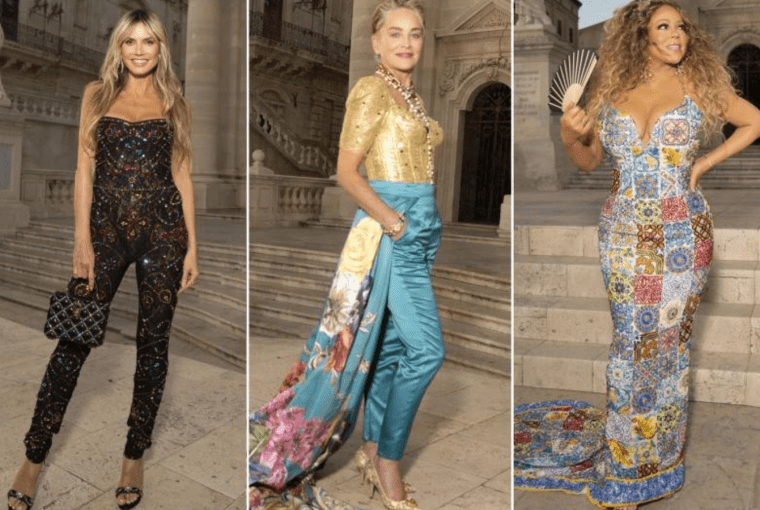 And what a show it was. For the event, Dolce & Gabbana took over Siracusa’s major Piazza Duomo. Showcasing looks after an epic look against the breathtaking backdrop of the Siracusa Cathedral. Consider beautiful lace gowns, larger-than-life ruffles, religious symbolism, and a lot of red, black, and gold: after all, the show was inspired by the Sicilian woman.

Mariah Carey brought her 11-year-old twins, Monroe and Moroccan, to the show, while Ciara and Russell Wilson did the same. Other notable attendees were Sharon Stone, Emma Roberts, and Heidi Klum, whose daughter Leni walked the runway.

Sharon Stone, Helen Mirren, and Mariah Carey were among the famous faces in the audience during the Dolce & Gabbana Alta Moda presentation in Sicily. Lupita Nyong’o and Drew Barrymore, as well as singer Ciara and Kardashian matriarch Kris Jenner, attended the event.

Mariah Carey wore a form-fitting dress with a train decorated with Sicilian tile designs and a tiara in her hair for the first performance on Saturday. The 52-year-old singer, known for her five-octave range, was also carrying a fan.

Meanwhile, Stone wore a gold lace corset top tucked into blue slacks with an overskirt embellished with hand-painted flowers. Stone, who was invited to observe the garment being created, posted footage of the flowers being drawn on social media, saying: “Wearing a couture Dolce & Gabbana gown entails this creative skill. Yes, it is this lovely.”

Drew Barrymore wore an organza costume with flowers on the sleeves that shifted between red and pink tones. The actress also wore a floral crown in her hair and wore no make-up.

Lupita Nyong’o donned a corseted dress with tile detailing, while Kris Jenner, who went with her partner Corey Gamble, wore a white dress beneath a floor-length cutwork lace, abaya style jacket with ivory organza frills at the cuffs and hem.

See what everyone wore to the show in the gallery below.

COUTURE THAT BRINGS A TEAR TO THE EYE, AT VALENTINO

Dua Lipa X Puma Flutur Is Back And With All New Aesthetics!