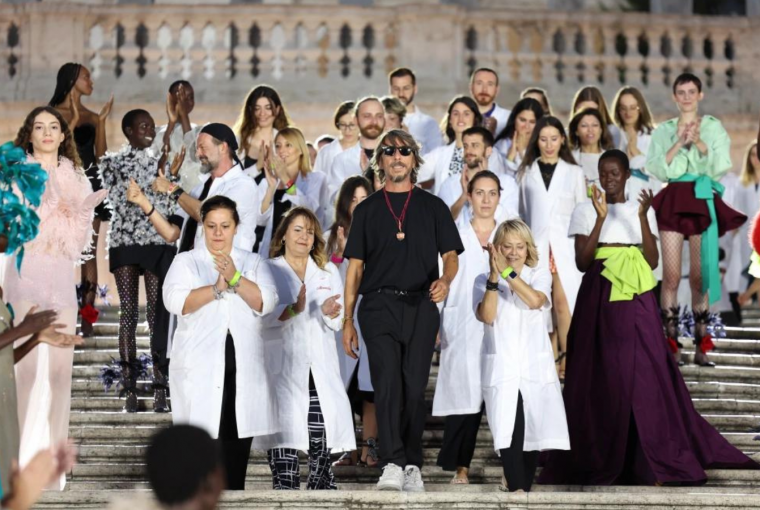 It takes a unique kind of event to inspire a standing ovation from the fashion business, which is notorious for its steely demeanor. Pierpaolo Piccioli, presenting an Haute Valentino Couture excursion, would be capable of such an accomplishment.

Piccioli set the tone for an event surpassing the regular catwalk routine by concluding the haute couture Fall/Winter 2022-23 season in Rome rather than Paris. They delivered just that, with a sparkling midnight show set on the historic Spanish Steps and a front row that included Anne Hathaway, Florence Pugh, Ariana DeBose, Andrew Garfield, and others.

The collection, titled “Valentino The Beginning,” paid attention to Valentino’s 63-year history, even down to where Valentino’s eponymous designer built his first boutique in the 1960s. “I know it sounds oxymoronic to talk about beginnings,” Piccioli explained during a news briefing before the exhibition.

“But that’s how I feel because every beginning inspires the sense of a promise and the future… Couture is a never-ending beginning, as you must always start from scratch, with no predetermined patterns or blueprints. Six months or six years after it was produced, the same design can be perceived in radically different ways. The individuals that wear it, the human approach, are what make the difference—and that’s the tale I like to tell.”

The love for Valentino Garavani and the brand he created was also clear in the collection’s 103-look collection. The first piece, for example, was a recreation of Valentino’s legendary ‘Fiesta’ gown from his first runway show; this time, the famed red flowery strapless dress was very short and covered in 3D roses made of dazzling red taffeta.

This season, it appeared as if discussions about size diversity had all but faded away, but Valentino’s inclusive casting felt like the perfect antidote to that outdated homogeny. The color palette was equally uplifting, with gorgeous magentas, lime greens, violets, teals, and blood reds: these were clothing that made you smile from ear to ear.

Piccolo’s joie de vivre was so visible in his garments that when the designer and his team of ateliers took to the runway for a final bow, the notoriously difficult-to-please fashion pack rose to their feet in a collective cheer. It was couture at its finest, as Pierpaolo Piccioli’s solo Valentino stint has come to be known.

Couture Obsession! Thoughts on the Fall 2022 Season Trends and Meaning