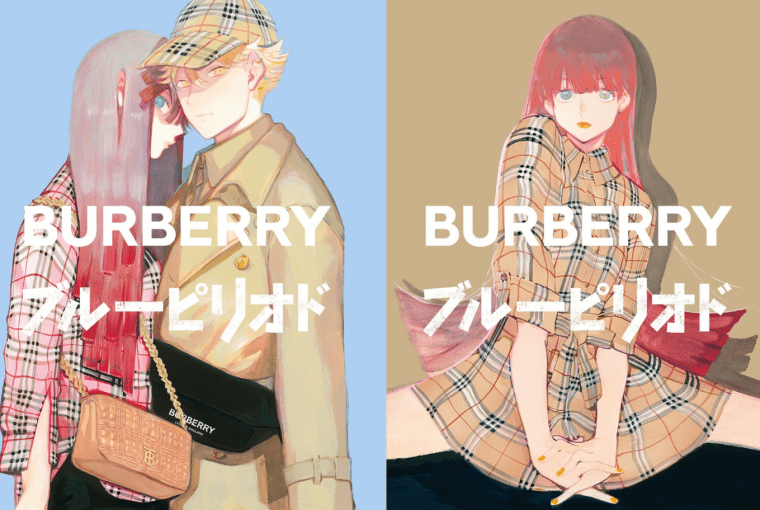 Previously we have seen the luxury fashion brand Burberry collaborating with the world of gaming, anime, and pop culture to capture the attention of fans. No stranger to unique collaborations, like the one it had with Supreme and Roblox, Burberry had shortly announced its partnership with the award-winning manga series ‘Blue Period’ written and illustrated by Tsubasa Yamaguchi.

Burberry’s collaboration with ‘Blue Period’ sources creativity and self-expression since the manga allows the brand to explore a new domain. Especially for this collab, the author created a limited-edition Burberry- inspired issue that features a bespoke storyline and includes a character named after the brand’s signature quilted bag, Lola.

Similar to the Burberry x Roblox partnership, where the brand introduced its signature Lola bag to the gaming world via five limited-edition virtual designs, the iconic bag is once again in the picture with the new partnership.

Shifting the focus towards the Lola bag, the values of the series shape Yamaguchi’s one-off tale. It depicts an emotional journey in which the characters, Yatora and Ryuji, meet with a new character, Lola.

Inspired by the character’s bold behavior, inner strength, purity, and the freedom of her self-expression, the Lola bag incorporates the features too. Yatora admires the character and how she has curated a life that he wants, a life free from both external and internal restraints.

While creating the storyline, author Tsubasa Yamaguchi revealed that he had watched Burberry on TV since childhood. “It is one of those brands I not only feel familiar with but also admire. That’s why I was really surprised to be offered this opportunity to collaborate, and to be honest, I feared that the project may be unachievable.”

“I came to think about the things that only manga can do and those are the things that I must do. Since Burberry is a brand that I admire, I was careful not to treat it with excessive respect and tried to work in the same way as usual. I felt that doing so is the best way to show my respect towards Burberry and I hope this feeling gets conveyed to Burberry fans.”

Yamaguchi adds that when the discussion progressed and the collaboration was decided, he also reflected deeply about why ‘Blue Period; was selected.

Sharing the same belief in creativity opening spaces and enriching people’s lives, the special issue of the manga is designed to celebrate the journey that comes with creativity and the positive impact of pushing boundaries.

Burberry partnered with Arts Initiative Tokyo and its dear Me project. Arts Initiative Tokyo is a non-profit organization that provides young people from underprivileged backgrounds with an open approach to learning through art and expression. dear Me organizes workshops, lectures, and events where participants can learn together about art and the social issues and systems they are confronted with.

The Burberry Launch And Takeover

For the limited-edition issue, Burberry made it available for visitors to take free of charge within all Burberry boutiques across Japan on Saturday, 20 August 2022. The issue was also available on digital platforms for those unable to access a store. There were also exclusive mobile phone wallpapers drawn by Tsubasa Yamaguchi available for download on Burberry’s LINE account.

To encourage community participation in the arts and celebrate the story behind this special issue, Burberry organized a takeover of their Omotesando store. The store’s interior was adorned with enlarged manga illustrations of Yatora, Ryuji, and Lola. The exhibition of the story across the store’s third floor was presented in an immersive museum-style format. Several celebrities attended the takeover dressed in Burberry attires!