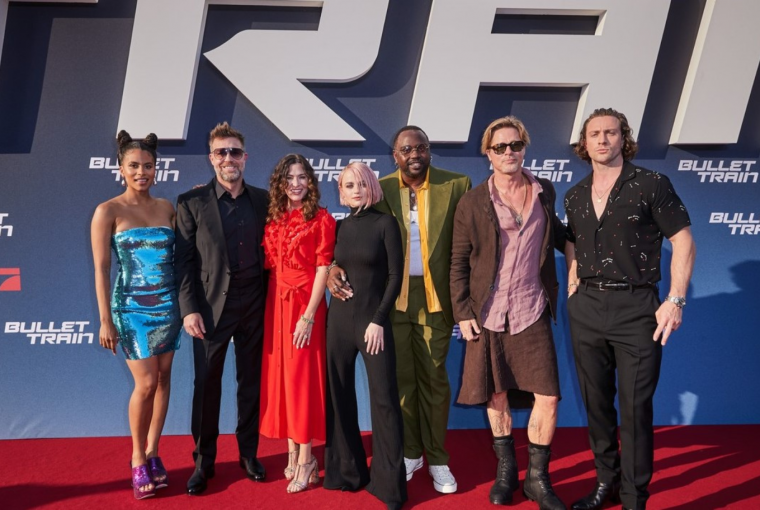 Brad Pitt’s skirt and Joey King’s pink short hair had us in shock for the Berlin Premiere of the movie ‘Bullet Train’!

Brad Pitt is keeping up the hype for the Bullet Train press tour with his new and unique fashion style. As the 58-year-old Oscar-winning actor attended the film’s latest premiere draped in a skirt on Tuesday, 19th of July, at the Hotel Adlon in Berlin, Germany.

‘Bullet Train’ is the latest movie directed by David Leitch, featuring a star cast, including Sandra Bullock, and focuses on five assassins on a bullet train from Tokyo to Morioka with similar missions.

Brad Pitt stars as Ladybug in Bullet Train; an unlucky assassin determined to do his job peacefully even after failing too many missions. However, fate it is; Ladybug’s latest mission puts him on a collision course with lethal adversaries from around the globe. To make it intriguing, all have some connected yet conflicting objectives and are gathered together on the world’s fastest train! How exciting does it sound!

As for the premiere, Brad paired a monochrome knee-length skirt with a matching jacket, a button-down, and boots. The event was joined by his co-stars Joey King, Zazie Beetz, Aaron Taylor-Johnson, and Brian Tyree Henry. The director David Leitch and his wife Kelly McCormick, who served as one of the film’s producers, were also present at the event.

Another shocker for all the fans was the short pink haircut Joey King flaunted at the Berlin Premiere that made her look more edgy and intimidating! Zazie Beetz in a turquoise sequin dress shone brightly in the sunlight too! Check out below all the celebrity ensembles at the ‘Bullet Train’ Berlin Premiere that left us speechless!

Also Read: Celebrity Fashion At The Gray Man London Premiere Is Too Hot For The Temperature!

Celebrity Fashion At The Gray Man London Premiere Is Too Hot For The Temperature!

Some Of The Most Iconic Twice Outfits Of All Times That Had Us Swooning!