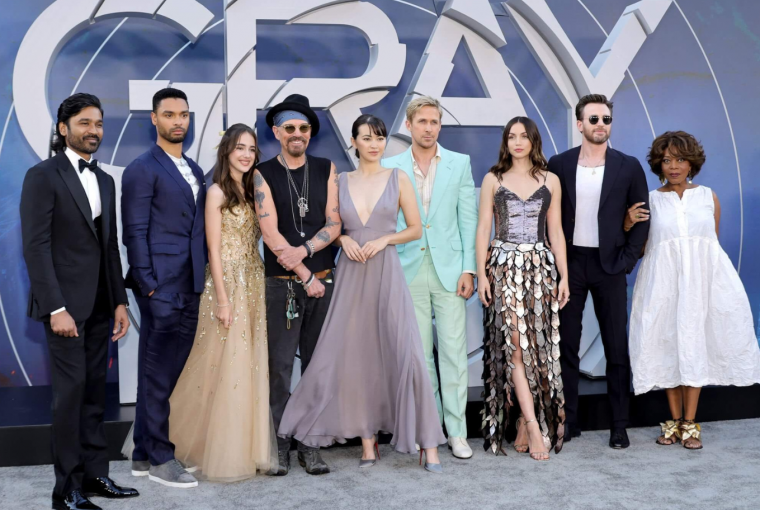 Chris Evans, Ryan Gosling, Dhanush, and the other cast appeared on the red carpet for the World Premiere Of ‘The Gray Man.’

The movie ‘The Gray Man’ is based on one of the New York Times bestseller book series of the same name. This can be deemed a much-awaited film directed by The Russo Brothers, and the fans hold high expectations for the film. It is said to be a high-octane action film with intriguing characters. One can say it is definitely going to be a hit since the trailer of The Gray Man has already hit the ball mark!

On 13th July, Wednesday, the entire cast of the upcoming movie ‘The Gray Man’ was seen at the TCL Chinese Theater in Los Angeles for the World Premiere of the film. The action movie is set to be released on 22nd July and will be available on Netflix as well.

The entire cast of ‘The Gray Man’ included Dhanush, Ryan Gosling, Ana de Armas, and Chris Evans, along with the directors Anthony Russo and Joe Russo. The cast gleamed in gorgeous ensembles on the red carpet of the Premiere.

The cast was joined by various other A-listers such as Regé-Jean Page, Julia Butters, Jessica Henwick, Alfre Woodard, Kara Del Toro, Emma Brooks, Simone Ashley, Any Gabrielly, and more at the red carpet for the World Premiere Of ‘The Gray Man.’

Check out the best red carpet attires at the Premiere that left us exclaiming at first sight!!

Best Celebrity Fashion At World Premiere Of ‘The Gray Man’

A New Gigi Hadid Campaign, Ryan Gosling Steps Out In Style And More!