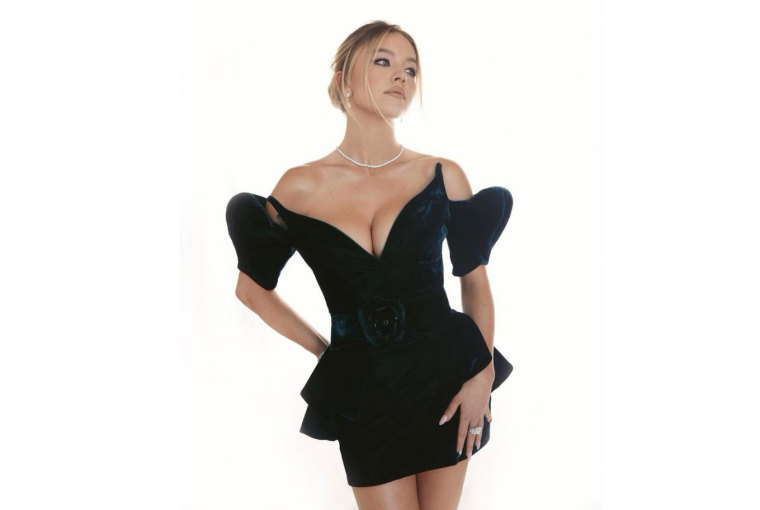 The 24-year-old Euphoria actress attended the Hollywood Critics Association’s second annual TV Awards on Saturday. Sydney Sweeney walked the red carpet in a vintage 1981 Mugler minidress with flared material at the waistline. Playing the role of Cassie in the series ‘Euphoria’, Sydney look more of Maddie in the velvet dress at the event!

Styled by Molly Dickson, the dress was a dark green velvet Thierry Mugler dress from 1981. The dress features a plunging deep-V neckline, a corseted bodice, a high-low peplum, off-shoulder puff sleeves and a a thick belt. However, the pointy horns at the shoulders in both the front and back that earned it the “Vampire Dress” nickname are what caught the attention!

Given that the dress caught the attention of the crowd, Sweeney and Dickson chose to accessorize the look minimally. They went with Jimmy Choo’s steel-toe pumps and some elegant jewelry from De Beers that included a sparkly diamond necklace.

At last nights HCA Awards. Syd really envisioned a vintage dress for this event and after lots of research we found this 1981 Mugler from New York Vintage and then paired it with some Jimmy Choo + De Beers”

The Mugler dress sourced back to New York Vintage, and its fanned-out accents for both- the bust and waist- gave it a dramatical look. Mugler has been known for its extraterrestrial-like shapes, and this design proved its glamorous take on the peplum tops that were popular in the 2010s!

The Complete Guide For Stylish Birthday Outfits For Girls In 2022