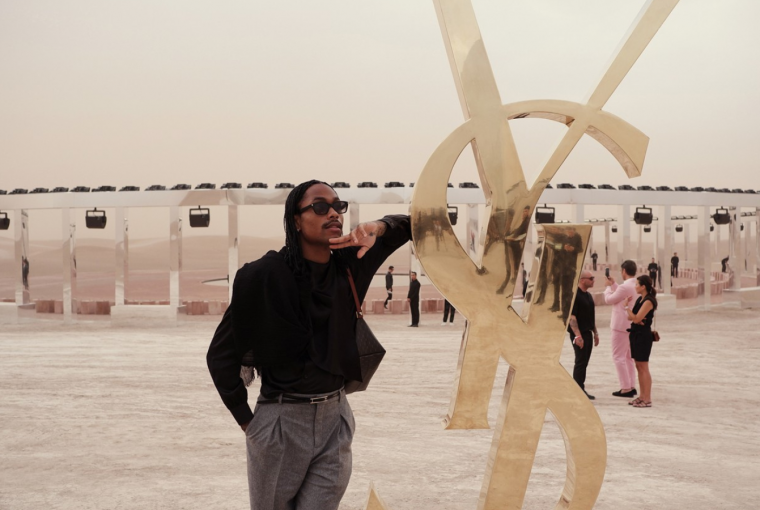 MOROCCO: Against the backdrop of the Agafay Desert, Saint Laurent creative director Anthony Vaccarello seemed to summon the very spirit of Yves Saint Laurent himself with a sumptuous Spring Summer 2023 collection that probably contributed to the beautiful views.

The tuxedo has always been Saint Laurent’s defining silhouette. For SS23, Vaccarello re-centered it in a way that promotes a new way of thinking about the traditional black tie affair. One with softer lines and structured detail that is more relaxed yet completely elegant.

Over the last few years, a question mark has begun to loom over the formality of suiting, and designers have delivered interpretations with varying degrees of success. Vaccarello, for his part, may have had the most difficult and easiest time of it.

It’s difficult because the suit is so central to the Saint Laurent DNA. Easiest because the Maison has constantly dismantled and redefined how the architecture of the tuxedo should look and move in accordance with the times.

While others were determined to casualize the essence of the suit, Vaccarello sought to highlight the tuxedo’s inherent sensuality for Spring Summer ’23.

High-waisted pants added an elongated, less formal finish to the most formal of suit styles, while shirting veered between the custom designed and the sheer, another iconic code of the Saint Laurent house that first appeared in 1966, as did the controversial see-through Cigaline on a female model.

The latter was possibly the most important aspect of the show. Saint Laurent has made a habit of blurring the lines between masculine and feminine, particularly in their womenswear collection. This philosophy has been carried over to Vaccarello’s menswear trying to offer, and it is all the richer for it.

Models were styled in such a way that bare chests slashed through the fluid lines of jackets or peeked out from under exaggerated bows attached to shirting, inspired by Saint Laurent muse Betty Catroux.
Shoulders were sculpted, and Vaccarello’s signature rock chic was subtly tempered throughout a collection that was more suited to the comforts of a silk chaise eating figs than previous underground club collections.

While Vaccarello has described this as the most personal collection he has created for Saint Laurent since taking over, it is difficult not to feel that this is the most “Yves” Saint Laurent has been in a long time.