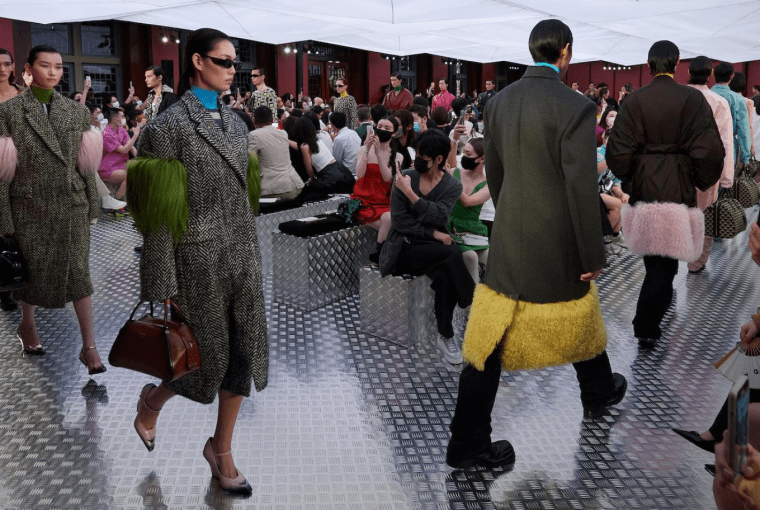 Prada presented its Fall/Winter 2022 Men and Women Collection by Miuccia Prada and Raf Simons at the Prince Jun’s Mansion in Beijing.

Reflecting the Milan Fashion Show, the Beijing repeat of Prada’s men’s and women’s fall 2022 collections came as a surprise for many. The Italian maison featured some of the most high-profile Chinese film stars in the fashion show, along with more than 400 guests attending the show at the Mansion.

Conceived alongside one another, the collections are unified in their fascination with and reflection of humanity, a celebration of life and living – a fundamental principle of Prada.

The Prada Fall/Winter 2022 Show was held at Prince Jun’s Mansion, a royal compound that was formerly the residence of Prince Jun in the Qing dynasty. Prada worked with AMO to transform the space and added geometric lighting systems and industrial non-slip metal flooring. These additions gave a touch of modernity to the ancient red-bricked palace and its back garden.

The lighting elements included traditional Chinese lanterns that created a visually atmospheric space. The bright ceilings and vertical partitions of three-dimensional triangular modules with the ambience of soft pink light focused on the reflections in the ponds of the palace grounds. To add some contrast, the crafted lighting elements, floor and seating areas were covered with treadplate metal sheets, a mirroring surface to amplify the overall light and colour.

The restaged Prada show featured 51 looks with slightly altered styling and a few additional pieces from the previous show. Yihan “Chace” Zhu, a famous rock band Mandarin frontman and DJ, mentions how the elements of juxtaposition from Depeche Mode’s soundtrack further enhanced the show. The event was live-streamed on the brand’s social media platforms, Weibo, Douyin and Tencent Video, with more than 92.7 million viewers.

The pieces featured a silhouette that slowly transformed into everyday garments. Contradictory as they were, the two concepts merged together beautifully in the form of apparel. Sartorial construction methods applied to knitwear, bomber jackets, and soft dresses for women gave a twist to the iterations.

The Juxtapositions were seen both- between garments as well as within their construction. This allowed the merging of the materializations and decoration of the outfits. Flaunting Prada’s classic heritage, the geometrics were converted to jacquard knits while the embroideries and colors were prominent, weaving some incredible memories and moments.

Below are some pieces from the collection you can take a glance at!

Serena Williams Featured On Vogue – Bids Her Farewells To Tennis