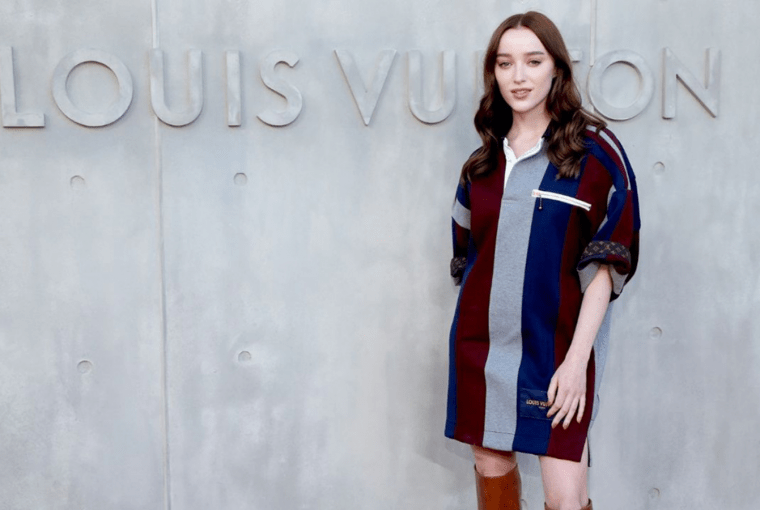 “On May 12 at 6:45 p.m., Nicolas Ghesquière revealed his current Louis Vuitton Cruise Collection at the Salk Institute in La Jolla, California. Gemma Chan, Maude Apatow, and Miranda Kerr were among the celebrities who came to see the collection.”

The Niteroi Museum in Rio de Janeiro in 2017 and Palm Springs’ Bob Hope House for the 2016 season were all popular venues for Louis Vuitton’s Cruise shows. But visitors agreed that this year’s venue, the Louis Kahn-designed Salk Institute in La Jolla, beat them all.

Phoebe’s hair was a dark auburn color, a change from the strawberry blonde regency-inspired locks that made her famous on Netflix’s smash drama. She wore an enormous Louis Vuitton sportswear-inspired henley shirt with a wide stripe and, of course, the French Maison’s emblem on the hems of the sleeves. The Bridgerton beauty kept her makeup simple, with bronze eyeshadow framing her fluttery lashes. A pair of tan knee-high boots straight off the runway completed the outfit.

Designers can usually experiment with the venues of their collections at cruise displays; Chanel, for example, displayed its Formula-1 themed 2023 cruise collection in Monaco this year. In an official statement this year, Louis Vuitton said it wanted to continue “its architectural adventure of presenting cruise collections in unique sites of remarkable architecture and reputation across the world.”

As a result, the Salk Institute in California was chosen as the venue. Louis Kahn designed this Brutalist masterpiece.

Fendace: The Swap Collection 2022 Is Out Now

Ultimate Guide On Trending Hair Style For Fat Guys In 2022