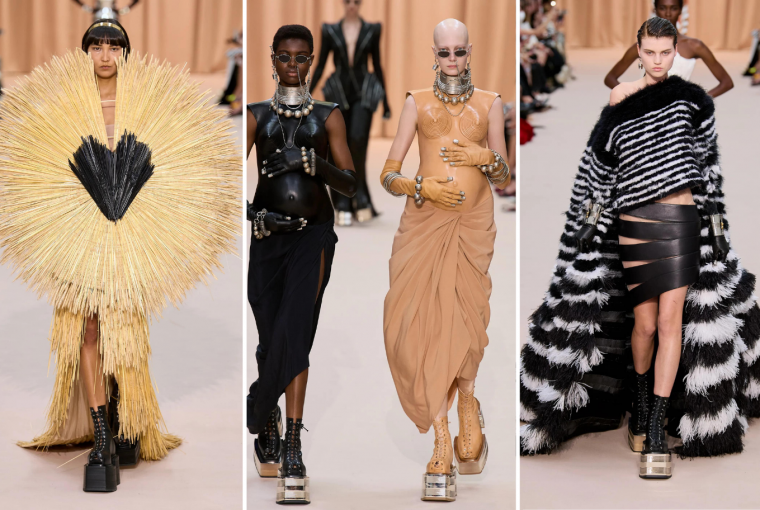 “This collaboration helped me to understand who I am without Balmain.”

On Wednesday, July 6th, the Paris Haute Couture Week again gave us some of the most memorable moments amidst the Jean Paul Gaultier Haute Couture Show. The show was a collaboration between Gaultier and Oliver Rousteing, the creative director of Balmain. And we can safely say the show was not only nostalgic but also gave everyone a shot of adrenaline with the thrilling designs!

“This meant a series of very personal snapshots. A memory of my father with Gaultier’s iconic Le Male fragrance in its tin can casing, for instance, or Madonna dressed by Gaultier in a nipple-freeing ensemble for a 1992 amfAR gala. If you think about that today, we cannot [go there]. So he was ahead of his time about freedom of expression. Today, we talk about inclusivity, we talk about diversity, we talk about breaking boundaries, we talk about no binaries, no gender. Obviously, Jean Paul was the first one to do it.”

There were countless iterations in the collection of the conical bra shape and Trompe-l’oeil techniques (yes, the one made famous by Madonna!) onto bustiers, blazers, and gowns, including one made of a woven basket material à la, caned furniture.

Rousteing really went forward with the materials by including sculptural dresses made from what looks like shiny silver and gold metal, resembling Gaultier’s famous Le Male and Classique perfume bottles. Rousteing also included two leather-clad baby bumps featuring the cone boobs within the collection, so can we suspect Rihanna to be the inspiration!?

Rousteing also incorporated some of his own Balmain signatures into the collection, such as sculptural party mini dresses and gowns with exaggerated hip and shoulder silhouettes.

Gracing the front row and making the headlines was none other than the three generations of the Kardashian family- Kris Jenner, Kim Kardashian, and North West! Kim wore a Gaultier outfit with stripes and nude breastplates while her nose rings matched with her daughter North.

North was no less stunning in her Paris chic outfit with a beret and striped outfit. Probably, she might turn out to be one of the most fashionable star kids in the future. She was also spotted accompanying Kim at the Balenciaga Haute Couture previously!