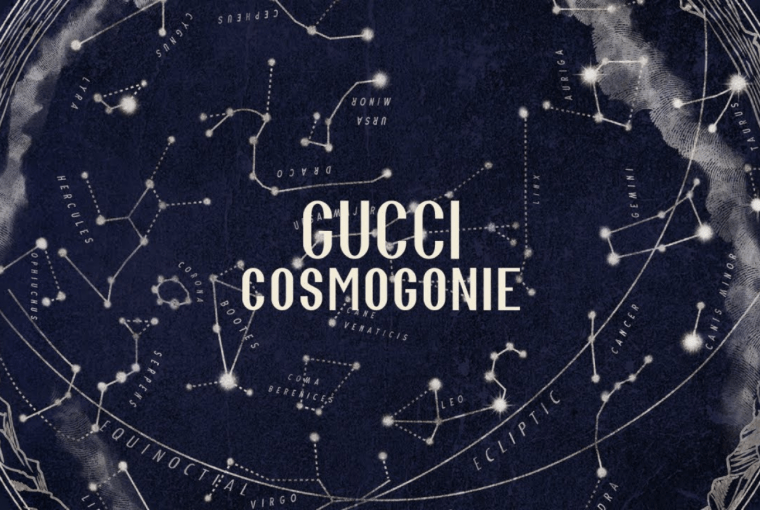 Of course! You can only expect a designer like Alessandro Michele to take ‘Cosmogonie’ or, as it translates from French, ‘Cosmogony’ as his theme for the Gucci Cosmogonie Cruise 2023 Fashion Show. Ultimately, the show was a tribute to Hannah Arendt and Walter Benjamin, with the latter being a collector of quotations.

“What can seem, at first sight, atomised and dispersed, like stars in the sky, through Benjamin’s eyes become an assembly of complicity,”

Set with the backdrop of Castel del Monte in Andria, Italy, the Gucci Cruise show was held under the moonlit night along with the lunar eclipse. The fashion show that was set in Puglia seemed rather unreal or enchanting, along with the cosmic background.

The Cosmogonie Fashion Show Collection was a mixture of Italian and French styles wrapped together by Michele’s whimsical art. The collection was everything from the ruffs, gladiator shoes, pearls and opulent colour pairings to utter sheer outfits with thigh high boots. The outfits were adorned with embellishments and sequins, giving a glamorous look.

Gucci’s Castel del Monte is a 13th-century citadel on Andria hill. The architectural marvel features an octagonal design and countless symbols housed within its geometry. Not only Michele but many other researchers have been fascinated by the monument over the centuries.

The best part about this fashion ode was the unexpected welcome gift! The attendees received a welcome present that was nothing less than abstract. The Italian luxury house adopted a star for each person who attended the show to make it a memorable experience of witnessing the Gucci Cosmogonie Cruise 2023 Fashion Show.

Who All Attended The Show?

You cannot say it is a Gucci show unless there is a huge crowd of attendees. The first row probably was filled with all the celebrities among the crowd. The ones to attend the Gucci Cosmogonie Cruise 2023 Fashion Show were  Dakota Johnson, Elle Fanning, Jodie Turner-Smith, Måneskin, Mark Ronson, Paul Mescal, Lana Del Rey and Shin Min Ah.

The Best Dressed Celebrities At The Billboard Music Awards 2022