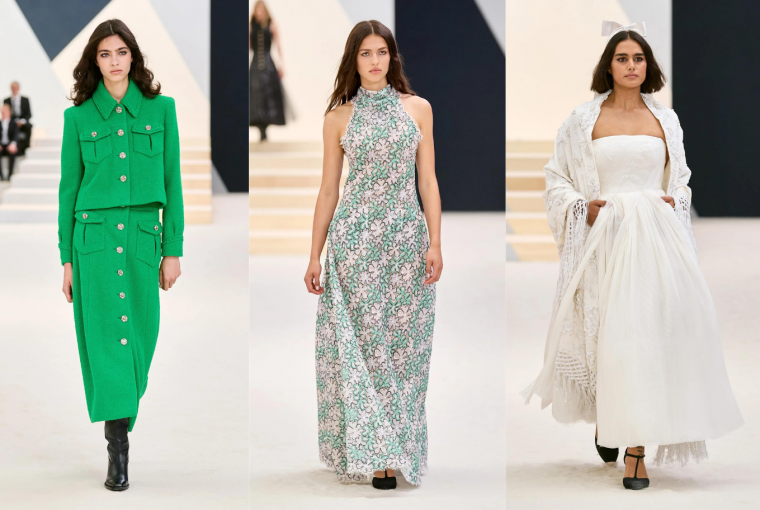 Held in the outdoor stadium of the equestrian L’Étrier de Paris Centre in the Bois de Boulogne on 5th July, Tuesday was the Chanel Fall Haute Couture that brought us a spectacular show after a long time! The night opened with the pop star Pharrell Williams playing drums and the music by French artist Sébastian Teller.

The mood was dramatic with the abstract geometry such as stripes, arches, pinwheels, cubes, and more giving a graphic visual effect to the set. The guests had to walk through or around some structures before moving indoors only to reach more sand and a set of vibrant color blocks of black, white, sand yellow, and gray.

About The Chanel Fall Couture Collection

“In this new collection, there are suits, long dresses like Mademoiselle Chanel imagined them in the 1930s: fitted to the body even though they have strong shoulders here, and pleated dresses like the wedding dress for instance. And lace too, inlaid, reworked, not embroidered, but repainted. The palette consists of bright green, khaki, beige, pink, lots of black and silver,”

The collection featured lace painted in resin, embroidered leaves on a white tulle trapeze dress, an all-over deco print on a bell-skirted coat dress that had been embroidered with sequins by Lesage, and even tufts of ostrich plumes that were applied to black chiffon and peeked through the openings of a trench coat of textured black tweed.

Deftly cut dresses, round shoulders, geometric embroideries, and graphic patterns all can be spotted within this Chanel Fall Couture Collection inspired by the 1930s era of Chanel. The finale look, and we can safely say the most angelic look, of Jill Kortleve as the Chanel bride in a white strapless gown with a hair bow was surely a pleasant surprise for the attendees.

Marion Cotillard, Maggie Gyllenhaal, Clémence Poésy Taraji P. Henson, Clemence Poesy and Leslie Mann were among the celebrities spotted at Chanel Haute Couture Show. But one of the best looks that left us speechless was Kiera Knightley in the front row. Dressed in a halter-neck lacy black midi dress with a velvet neck bow, the look was enough to get someone hooked. The signature Chanel Mary Janes and a quilted bag were all that took Knightley to live up to Chanel aesthetics.