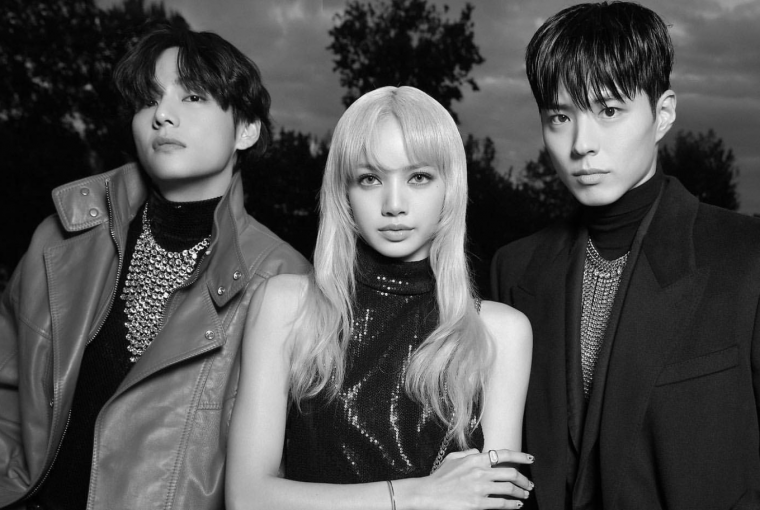 The French Luxury house Celine’s designer, Hedi Slimane, lined up a parade of bare-chested models in sheer, unzipped tops and dazzling blazers for the Paris Fashion Week Summer Spring Collection. On the Sunday night, 26th of June, marked the return of Celine to the Paris Fashion Week’s menswear shows – and also the closing of the week of events.

The date marked the 20th anniversary of the show’s location, Palais de Tokyo, as well as the  20th anniversary of Hedi Slimane’s first show at the same venue. The contrasted walls had set a dramatic backdrop for Slimane’s shows during the live-streamed pandemic presentations. This show for Paris Fashion Week was titled as ‘Dysfunctional Bauhaus’.

The Hallyu stars gave us the most iconic moment of the life time after IU’s first appearance at Cannes this year! All of the stars were seen in two outfits, a casual and one for the show. The three most famous idols of Kpop were seen posing together for the French House giving all the fans a heart-throbbing moment!

V was seen wearing leopard high-low shirt layered with a white tee inside and black wide leg pants. For the other outfit, the fashion icon layered a jacket over a turtleneck black sequin top and black leather slim-fit pants. The outfit was accessorized with an embellished OTT necklace, a black leather belt, and matching shoes. V completed the look with his signature center-parted messy hair and soft glam picks to round it all off.

For the starters Lisa was seen in a gray sweatshirt and leather pants carrying a Celine handbag. Later, Lisa attended the fashion show in a shimmery black top donned with a high-neck halter neckline, backless detail and sequinned embellishments. She paired it with black leather shorts, a black chained shoulder by Celine, and black pointed boots with high heels. Lastly, open tresses, berry-toned lip shade and subtle eye makeup were enough to complete her look.

The singer and actor who just returned from his military enlistment, Park Bo Gum was first seen in a brown and black leather varsity jacket and denim giving off boyfriend vibes! Park Bo-gum, for Celine fashion show, showed up in a black turtleneck jumper and a matching trench coat with matching pants. A silver chain necklace, messy hairdo and black dress shoes complemented his outfit at the end!